In my wild youth I used to fling my guitars about on stage with gay abandon – something that I’ve done less as I’ve gotten older. At this point I’m too attached to most of them, and not prepared to risk a terminal injury from another aerial flight into the drumkit at the end of a gig.

To try and remedy this, I picked up an Encore Strat (in a rather fetching hot pink colour) for a measly thirty quid – the plan being that I would upgrade a couple of bits and pieces to make it passable for live use, and deploy it for the higher energy situations where things may end up getting out of hand. Here is the Facebook marketplace picture that sold me on it: 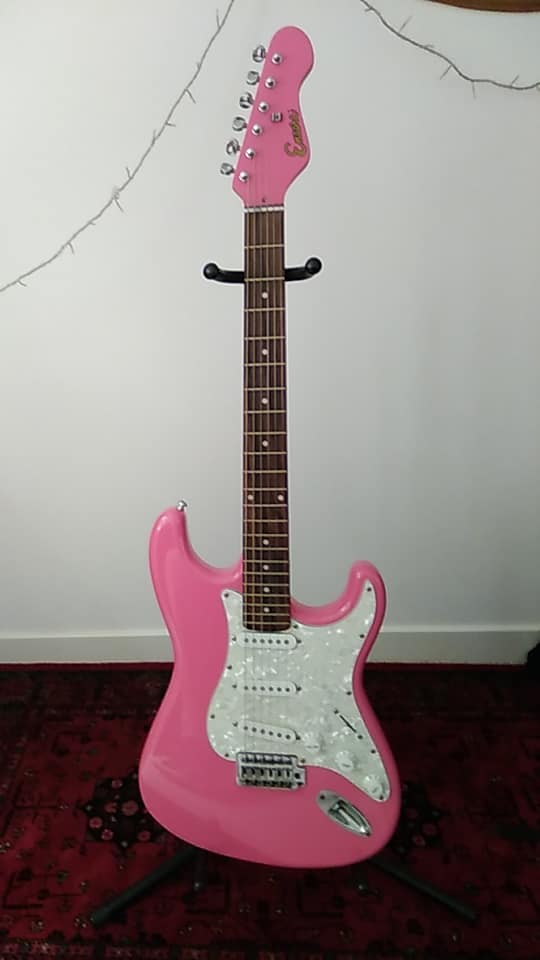 As you can see, it looks pretty great – especially with the matching pink headstock. In person, there were a few things of note:

Since the plan was to actually play this guitar live – rather than to just smash it up for the hell of it, I wanted it to be at least semi respectable, and took the opportunity to modify some of the poorer quality elements to bring it up to scratch.

I toyed with the idea of going the full hog: replacing the shoddy pickup selector switch, installing higher quality pots, etc, but in the end I stripped the upgrades down to the most ‘essential’ elements that I was going to be using. 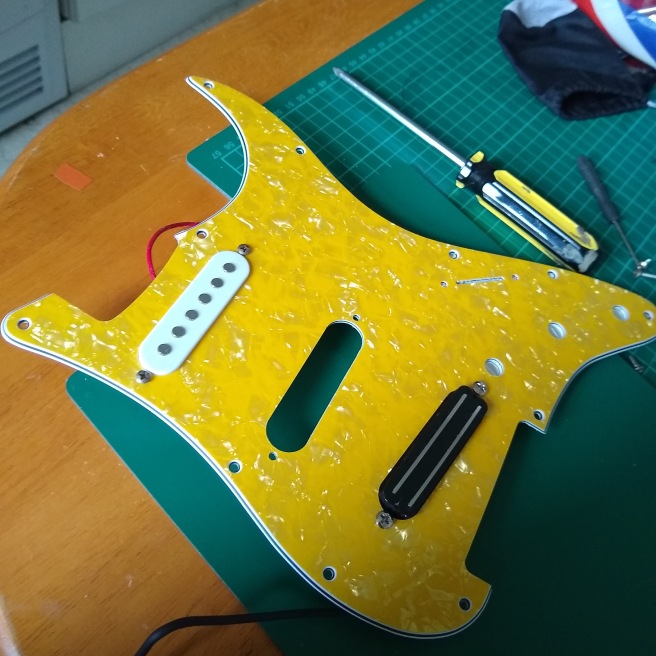 Unfortunately, the standard Strat sized pickguard didn’t fit properly – it was a little bit too big, and the screw holes didn’t match up at all. If I was precious about the guitar I would have been concerned about this, but since I’m not, I just wedged it into place and made new screw holes the old fashioned way – with brute force.

I didn’t bother shielding the cavity, as it seemed like a bit of a waste of money. The humbucker was naturally quieter than the single coils anyway, and the new pickguard had more extensive shielding on the back than the stock pearloid one, so I decided to leave it as is.

I was fairly surprised with how well the guitar played before the modifications (crappy components aside), and after I switched things out it sounded pretty decent, was much more comfortable to play, and looked a lot cooler. I loved how light the whole thing ended up being, as I could easily fling it about. The only problem now is that I’ve become quite attached to it, and not sure I’ll want to bash it up. But we’ll see how long that lasts.