I’ve not posted much recently, but I’ve been busy making stuff in the background.

My pal Lee left a bunch of his pedals with me to try out, and in amongst them was a kit to build an octave-up fuzz. I decided to put it together (and discovered how handy a multi-meter is at the same time).

When I realised how straight forward it is, I decided to have a bash at building my own signal splitter pedal as well, to take one input and give three separate outputs at the same volume.

I didn’t want to just leave the enclosures bare aluminium, so started to look into ways of painting them. After reading endless advice online, I decided to just get some spray paint suitable for metal, and use a varnish over the top. I didn’t bother sanding the cases down, as many people suggest – so we will see how they last longer term.

Lee had a good name in mind for the octave-up fuzz… which I scrawled onto the enclosure with an acrylic paint pen before putting the varnish top-coat down. 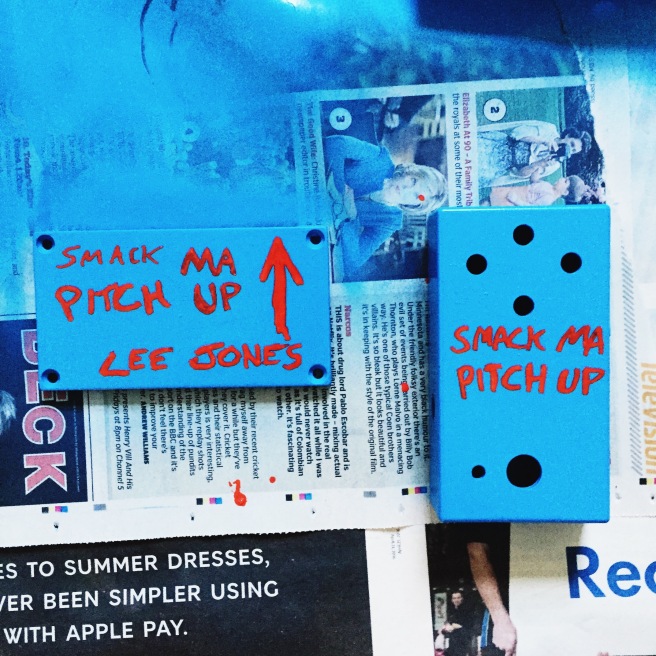 As well as the pedals, I decided to release a really limited run of my last album drouth on cassette tape – hand spraying each of the cases myself. Doing something so hands-on was really enjoyable… but there’s still a ton that I need to do before they will be ready. Like uh, buying a tape player. Ahem.

I’ve still to get the circuit together for the Smack Ma Pitch Up fuzz, but I got the line splitter pedal finished… and learned a fair bit along the way. The included LED wasn’t all that bright, so I stuck in an extra, high powered one – which I can’t show in the pictures as it is brighter than the sun.

The pre-drilled enclosures I’ve been getting save some hassle, but they are a pain to get a hold of in the UK, and the LED hole in the line splitter was way too big. So, I decided to get a drill press to do my own.

Hopefully this will mean I won’t drill off my hands in future when modifying Game Boys either. Not too bad for fifteen quid.

I’ve got a bunch of plans to make some of my own DIY electronic instruments and effects pedals in the future, so even though getting all the stuff together has been a wee bit of an investment, it should be worth it in the long run.

Because of all this stuff, I haven’t had too much time to sit down and make music over the past week or so, but I’m going to do so this weekend. I have a noise album that needs completed…

One thought on “﻿making stuff”